Difference between Hurricane and Typhoon

Distinguish, differentiate, compare and explain what is the difference between Hurricane and Typhoon. Comparison and Differences:

Cyclones, Hurricane and typhoon are storm systems that can produce extremely powerful winds, torrential rain, high waves and damaging storm surges, and can spawn tornadoes. These storm systems develop over large bodies of warm water and eventually may move over land. They are among the most devastating naturally occurring hazards and are capable of producing large-scale devastation on human populations.

Difference between Hurricane and Typhoon

3. Occurrence of Hurricane is possibly between June to November month. Possibility of Typhoon is from May to October. 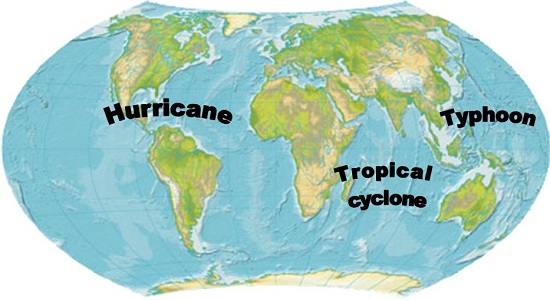 What is a Hurricane ?

Hurricanes are classified according to intensity using the Saffir-Simpson Scale. The destructive power of a hurricane can result in:
Loss of life
Buildings destroyed
Beach and dune erosion
Road and bridge damage along the coast

A typhoon is a tropical cyclone in the Northwest Pacific Ocean west of the International Date Line with sustained winds of (or those that exceed) 74 mph. Typhoons can happen at any time of year, but the season typically runs from July 1 to September 30.

Classification of Cyclone, Hurricane and Typhoon Based on Geographic Location

Hurricane: North Atlantic Ocean the northeast Pacific Ocean east of the dateline, or the South Pacific east of 160E.

Difference between Typhoon vs Hurricane

Differences between Typhoon vs Hurricane