Theory for Diode Working as a Clipper

Diode clippers are wave-shaping circuits in that they are used to prevent signal voltages from going above or below certain levels without distorting the remaining part of the applied waveform. The clipping level may be either equal to the diodes barrier potential or made variable with a dc source voltage. Because of this limiting capability, the clipper is also called a limiter. Thus a clipper circuit can remove certain portions of an arbitrary waveform near the positive or negative peaks. Clipping may be achieved either at one level or two levels. Usually under the section of clipping, there is a change brought about in the wave shape of the signal. 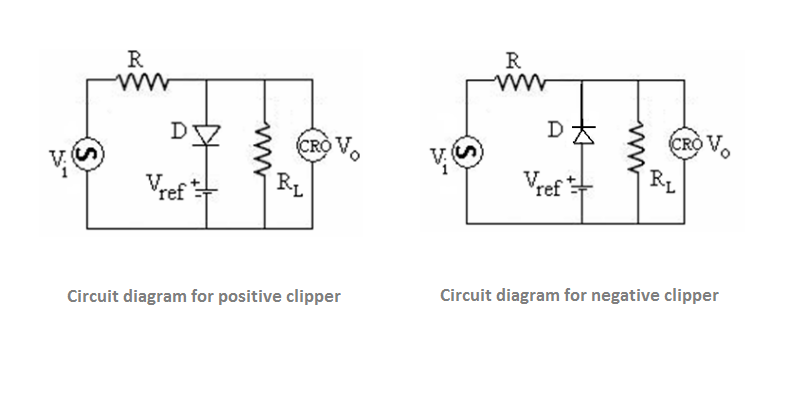 1. Before making the connections check all components using multimeter.

2. Make the connections as shown in circuit diagram.

3. Using a signal generator (Vi) apply a sine wave of 1KHz frequency and peak-to peak amplitude of 10V to the circuit.(Square wave can also be applied.)

4. Keep the CRO in dual mode, connect the input (Vi) signal to channel 1 and output waveform (Vo) to channel 2.

5. Observe the clipped output waveform. Also record the amplitude and time data from the waveforms.

6. Now keep the CRO in X-Y mode and observe the transfer characteristic waveform.

7. Vary Vref and observe the variation in clipping level. For this use variable DC power supply for Vref.

8. Change the direction of diode and repeat the procedure 1 to 7 and Vref to realize a negative clipper.

Observe the waveforms on the CRO for both the positive and negative clipper.

1) All electrical apparatus that connects to the AC power line must have a protective ground through a three-wire power cable.

2) Always double check circuit wiring before applying power. Always have a single switch or button that will immediately remove power from the circuit in case of trouble.

3) Always switch the circuit power off before changing components or connections. It is tempting to become lazy and change connections in low-power circuits with the supply on, but this is asking for trouble in the form of unintentional short circuits and blown components.

4) Always ask for directions or help if you are unsure of the correct measurement procedure or circuit connection.

Viva Questions and Answers for Diode action as a Clipper

Question.1: What is clipper?

Question.5: What is the application of clipper?

Question.6: What is positive and negative clipping?

Question.7: What is oositive clipper circuit?

Question.8: What is negative clipper circuit?

Question.9: What is combination clipper?

Question.10: Give some drawbacks of series diode clippers?