Explain and Write down the similarities between Inner and Outer Planets.

Similarities Between Inner and Outer Planets

1. Both revolve around the sun.

3. Both are spherical in shape.

4. Both orbits on the same planet

5. Both make up the solar system. 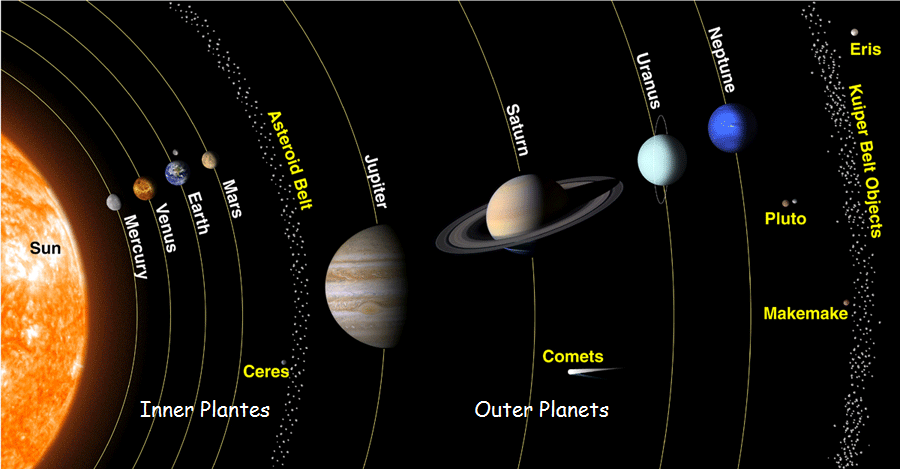 Differences Between Inner and Outer Planets

Mercury, the smallest planet, has no moons and is comprised mostly of iron and nickel. It is one of the densest planets in the Solar System. Venus, known for its brightness, has a rocky surface similar to the Moon, which is hidden by its thick yellow atmosphere. Like Mercury, Venus has no moon. Earth is a rocky planet with a molten core, an atmosphere that allows life to flourish, and only one moon. The last inner planet, Mars, has two moons called Phobos and Deimos. It is a rocky planet with a red color caused by a high concentration of iron in the rocks that comprise the surface.

The outer planets, also called Jovian planets or gas giants, are gaseous with no solid surfaces and only liquid cores. The outer planets are so much larger than the inner planets that they comprise 99% of the mass of the celestial objects orbiting our Sun. All of the outer planets have rings, although Saturn’s are the most noticeable.

Jupiter is distinctive for a number of reasons. In addition to being the largest and most massive planet, it also has the most moons – 63 discovered so far. Jupiter’s rings are very faint and difficult to see. Saturn is best known for its distinctive ring system, which can be seen from Earth by the naked eye. Uranus, which is the only planet to rotate on its size, has 27 known moons. Many satellites have names from mythology, but Uranus’ moons are named after characters from the works of Alexander Pope and Shakespeare. Some of the satellites are Titania, Oberon, and Umbriel. Neptune is the last outer planet and the final planet in the Solar System. With only 13 moons, it has the least number of satellites of any of the outer planets.

Difference between Outer Planets vs Difference - Similarities Between Inner

Differences between Outer Planets vs Difference - Similarities Between Inner