Objective / Aim of the Experiment

To study the variation of magnetic field and to find the radius of current carrying coil by Stewart & Gee's experiment method.

(ii) Radius of coil = Sum of distance between two points on X- axis.

This experiment is based on the principle of magnetic effect of current. It consists of circular coil of many turns of thin insulated copper wire. It is fixed with its plane vertical on horizontal bench. A magnetometer compass box is placed inside the coil such that it can slide on the bench in such a way that the center of the needle always lies on the axis of the coil. The distance of the needle from the center of the coil can be read on a graduated scale fixed on the arms of the magnetometer.

Description of the Apparatus

Stewart & Gee tangent galvanometer consists of a circular coil of thin copper wire with tapings at 5, 25 and 125 (5,50&100) turns. This coil is fixed vertically at the center of one-meter long horizontal bench. A magnetic compass box can slide from the center to either end of the bench along the axis of the coil. The whole length of bench is graduated in millimeter in order to read the distance of the magnetic needle from the center of the coil. The whole set-up is shown in Fig. Next. The magnetic field along the axis of a coil at a point is

Here n is number of turns in the coil, r is the radius of coil, i is the current in ampere flowing in the coil, x is the distance of the point from the center of the coil. If F is made perpendicular to H the earths magnetic field the deflection of the magnetic needle θ is given by H tanθ .......(2)

1. The magnetometer compass box is placed on the sliding bench so that its magnetic needle is at the center of the coil as shown in Figure in circuit diagram.

2. The coil is set in the magnetic meridian by the whole apparatus in the horizontal plane.

3. The current is adjusted using rheostat Rh so that the deflection of nearly 70o to 75o is produced in the compass needle placed at the center. Both the ends of the pointer are to be read.

4. The direction of the current is reversed and again both the ends of the pointer are read.

5. The mean of four reading in step 3 and 4 given the mean deflection at x.

6. The compass needle is then shifted through 2 cm each time along the axis of the coil and for each position the mean deflection is noted, i, e... steps 3,4 and 5 are repeated for distance x from the center of the coil 2 cm, 4 cm upto 20 cm.

(viii). Reverse the current and note the deflections of the pointer θ3, θ4 at the center of the coil. These should be same as θ1, θ2 for x = 0. Repeat steps for the reversed current. This gives θ3, θ4 and for the entire length for the bench.

(ix). The points of inflexion are marked on the curve. The nature of the graph is shown in Figure 2. The distance between the two points gives the radius of the coil. 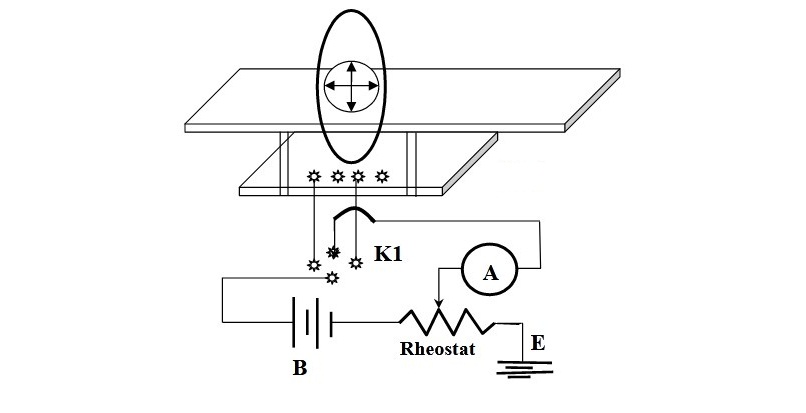 Table for measurement of θ

A graph is plotted taking distance along x-axis and tanθ along y-axis.
Standard value of the radius of coil = ...........cm.

(i) The graph between the distance from the center of the coil and tan θ is shown.

Sources of Error and Precautions

Question-3: How does the field vary along the axis of the coil?
Answer-3: It varies as shown in the graph. The points at which curve changes its direction of curvature are called points of inflexion. The distance between them is equal to the radius of coil.

Question-4: Is the field uniform at the centre?
Answer-4: It is uniform only over a very small region at the cntre.

Question-5: How can you get more wide region of uniform field?
Answer-5: By the use of Helmholtz galvanometer which consists of two exactly similar coils placed coaxially.