Aim of the Experiment

To study the dependence of potential difference (V) across a resistor on the current (I) passing through it and determine its resistance (R). Also plot a graph between V and I

The dependence of current on potential difference can be studied by Ohm?s law. According to Ohm?s law, the potential difference (V) across the ends of a resistor is directly proportional to the current (I) through it provided its temperature remains the same.
i.e. V ∝ I
or; V / I = Constant = R
or; V = RI

1. Before starting the experiment, note down the range, least count and zero error (if any) of the ammeter and voltmeter.

2. Wipe the ends of the connecting wires with sand paper to remove any insulating layer.

6. Insert the key in the plug to let the current establish in the circuit.

7. Adjust the rheostat, so that a small current passes through the resistor, say 0.1 A, so the reading of ammeter will be 0.1 A.

8. Read the corresponding value of potential difference from voltmeter.

9. Repeat the experiment by adjusting the slider, for the values of current 0.3A, 0.4A, 0.5A etc. and record the corresponding values of potential difference in voltmeter.

10. Lastly, plot a graph between V and I taking V along y-axis and I along x-axis.


Now, by plotting the graph between V and I taking V along y-axis and I along x-axis. We get a straight line and the slope of V versus I graph gives the resistance of the resistor. 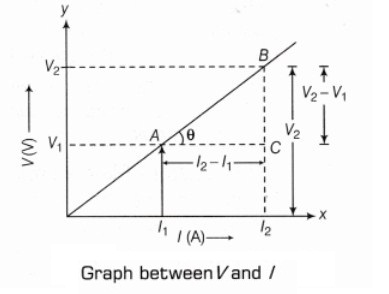 1. From the above calculation and observation, we have concluded that for a resistor, if temperature remains constant then current through the resistor is directly proportional to the potential difference applied across it.

2. The value of resistance R of resistor remains the same for all values of current through it. The graph between V and I is a straight line and passes through the origin. This verifies Ohm?s law.

Question.1: In this experiment, it is advised to take out the key from the plug when the observations are not being taken. Why?
Answer: It is to avoid the unnecessary heating of wires. Heating may change the resistance of resistors.

Question.3: Why is it advised to clean the ends of connecting wires before connecting them?
Answer: Ends of wire should be cleaned to remove the insulation (or insulating layer) of dust particles since, presence of insulation (which is a non- conducting material) wilt not allow current to flow in the circuit.

Question 8: What do you understand by the term emf of a cell?
Answer: The maximum potential difference which exists across the terminals of a cell when no current is drawn out of the cell is called emf (electromotive force) of a cell.